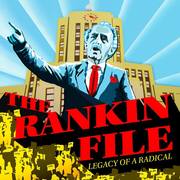 There is a housing crisis in BC, especially in the Lower Mainland, but this issue is not new, it was a hot button issue over 30 years ago. The year 1986 marked a watershed moment for Vancouver, it had to choose between two mayors with completely opposing views on how the city should move forward. Harry Rankin who wanted to make a city with more affordable housing and protections for renters and Gordon Campbell 's market focused vision to open up the city for business and make housing a commodity to be sold to the highest bidder. We all know who won and how the city is today. But what would it be like now if Harry had won?

The Rankin File: Legacy of a Radical chronicles Harry’s nearly fifty-year career beginning with his World War II military service as a soldier. Filmmaker Teresa Alfeld uses clips from old film that chronicled Harry's 1986 mayoralty campaign as well as interviews with his family, politicians and activists he knew, including his son Phil Rankin, his wife Connie Fogall, Mike Harcourt, Libby Davies, Jean Swanson, and, of course, Gordon Campbell to tell his story.

The past few years have seen the rise of populism on both the hard left and the hard right. As politicians from Bernie Sanders to Donald Trump in the United States, and from Jeremy Corbyn to Nigel Farage in the United Kingdom, attempt to harness the power of both the best and the worst of people looking for real change – and as Justin Trudeau attempts to split the differences here in Canada – what can we learn from the successes – and failures – of Harry Rankin?